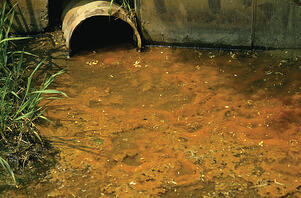 Resorts closed and swimming was finally banned in the 1940s, and “In the early morning of Thanksgiving Day 1943, a dike, holding back a series of Solvay waste beds, failed,”[ii] flooding a two-mile area around the lake. While no one was killed, rescuers suffered chemical burns. For many in the region, this was the wake-up call.  By the 1950s, the lake bottom and tributaries and waste beds, were contaminated with benzene, toluene, PCBs, cadmium and chromium. The waste beds had grown to more than 80 feet high, covering over three square miles.

In the early 1970s, fishing in the lake was banned, and work was finally initiated to clean up the contamination and restore the water quality. Various laws were passed around this time, including the Federal Clean Water Act in 1972, which established minimum wastewater cleanup standards and set up grants to help municipalities fund upgrades and construction of new treatment plants. A sewage treatment plant was built in 1979 on the south shore of the lake, and the water quality gradually improved, but not enough to meet the Federal water quality standards by the 1990s. In fact, the plant was still the most significant contributor of phosphorus and ammonia deposits in the lake.

An historic agreement was signed in 1998 between Onondaga County and the Department of Environmental Conservation, the State Attorney General and the Atlantic States Legal Foundation. As part of the agreement, the county was required to “reduce bacteria and floating waste reaching the lake from sewer overflows, and to monitor water quality of the lake and its major tributaries.”[iii] With the sewage plant committed to reducing phosphorus and ammonium discharges, progress on the lake’s water quality accelerated, and the community was heading into the 21st century with some optimism about a revival of Onondaga Lake.

In part three, we will cover what has happened in the last 10-15 years as part of the largest restoration project in the country. The project has received international attention as a model for cleaning polluted lakes and has brought a “public treasure” back to life.