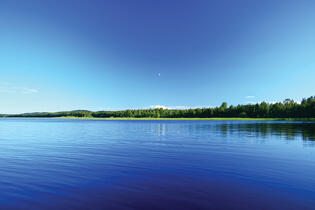 Despite the improving water quality, much needed to be done to clean up Onondaga Lake and give it back to the community as a true recreational resource. When it was declared a Superfund site, 12 areas in and around the lake were identified for cleanup. Each of these locations had a remediation strategy. In 2005, New York State Department of Environmental Conservation (DEC) and the U.S. Environmental Protection Agency issued the Onondaga Lake Cleanup Plan, and in December 2006, Honeywell, owner of the industrial sites around the lake, entered a Consent Decree with the DEC to implement the remediation plan.

Part of the plan included the dredging of an estimated 2.65 million cubic yards of sediment from the lake bottom in water 0-30 feet and using an isolation capping over 425 acres of the area. In water greater than 30 feet in depth, a thin layer cap would be installed over an estimated 154 acres.

“The most highly contaminated materials will be treated and/or disposed at an off-site permitted landfill. The balance of the dredged sediment will be placed in one or more Sediment Consolidation Areas (SCA) constructed on one of Honeywell's Solvay wastebeds, which historically received process wastes from Honeywell's former operations."

“The estimated cost to implement the remedy is approximately $451 million.”[i] Additional projects around the lake bring the cost of the cleanup to nearly $1 billion.

On July 31, 2012, Honeywell began dredging and capping the lake of contaminated sediments.  In November 2014, the dredging was complete; one year ahead of schedule. The completion marked a major milestone in the overall restoration project with additional habitat and capping projects running through the end of 2016.

Since the cleanup efforts began, the lake has experienced significant improvements, including:

Onondaga Lake, once considered the most polluted lake in America, is on its way back to becoming the proud centerpiece of the community. Despite all of the abuse it has absorbed for more than a century, Onondaga Lake is a symbol of resiliency and an example of what can be accomplished when science and technology work together with nature.