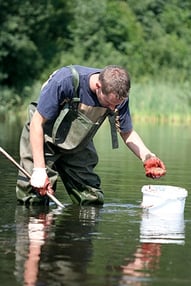 The U.S. Department of Energy (DOE) has released a new plan to address the Environmental Management (EM) challenge of mercury contamination at two sites in Tennessee and South Carolina. The plan “advocates for research and the development of technologies that could resolve key technical uncertainties with mercury in environmental remediation, the deactivation and decommissioning of facilities, and processing waste in tanks.”

Oak Ridge Reservation in Tennessee is home to the Y-12 National Security Complex. From the 1950s to the 1960s, the U.S. government produced enriched uranium for use in atomic weapons at Oak Ridge. During the site’s peak production, experts estimate that 11 million kilograms of mercury were used with roughly 330,000 kg being released into the surrounding environment. Cleanup and remediation efforts targeting soil and sediment contamination began in the 1980s.

According to the plan, the remediation activities to date have decreased mercury releases, but there are “elevated concentrations” in the infrastructure, water and soil.

“The overarching mercury challenges at Oak Ridge include remediation of the large quantity of residual elemental mercury still present in shallow source zones adjacent to and beneath former mercury use facilities, potential mobilization of mercury during planned deactivation and decommissioning (D&D) of large mercury-contaminated facilities and associated infrastructure overlying potential mercury sources, potential mobilization of other contaminants, and the persistence and bioaccumulation of methylmercury in the EFPC watershed despite remediation efforts. The estimated cost for mercury remediation at Y-12 is between $1 billion and $3 billion.”

Savannah Rivers Site (SRS) in South Carolina is considered a key DOE industrial complex that supports the national defense and U.S. nuclear nonproliferation efforts. During the early 1950s, five nuclear reactors were built to produce the basic materials used in fabricating nuclear weapons. From that time until the 1980s, groundwater below the surface became increasingly more acidic and contaminated with radioactive materials.

According to the DOE’s plan, mercury was used “for decades as a catalyst in the dissolution of aluminum cladding from irradiated targets in nuclear separation processes in the canyon facility and as a precipitating agent to remove chlorides.” While the mercury has not been released into the environment, more than 60,000 kg of the toxic material is stored in “high-level waste tanks and within the liquid waste system.”

Recommendations for ongoing remediation outlined in the plan include:

To read more about the DOE plan to fight mercury contamination, visit Energy.gov.