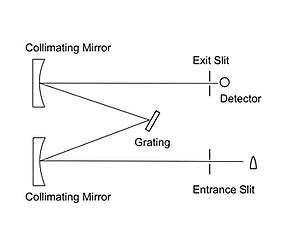 Additional improvements in wavelength versatility were achieved in the early 1980s with the development of the echelle optical system introduced by Teledyne Leeman Labs.  These instruments relied on a high dispersion echelle grating in combination with a second dispersive optic (usually a prism) to produce a 2-dimensional spectrum or Echellogram.  One of the hallmarks of echelle spectrometers is that they produce very high resolution spectra from relatively small optical systems; typical only 0.3 to 0.8 meters in length. Teledyne Leeman Lab’s early echelle spectrometers were capable of accessing more than one wavelength at one once (simultaneous), as well as sequential or even a combination of both, using a single optical system.  The result was an instrument with both high speed and versatility in one compact benchtop configuration.  The graphics below depict a typical 2-Dimensional Simultaneous Echelle Spectrometer and a Sequential Echelle Spectrometer. 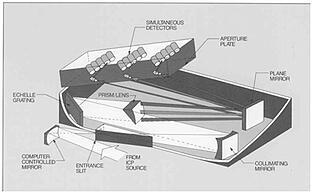 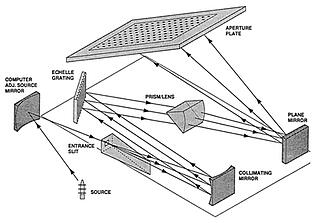 At the same time as Leeman Lab’s development and introduction of the echelle optic system, other manufacturers began offering combination units incorporating both Paschen-Rünge simultaneous spectrometers and scanning sequential spectrometers in one large instrument.  Both of these approaches (Echelle or combination Paschen-Rünge/Sequential Spectrometer) gave the user the capability of high throughput for routine samples and the versatility to quantify nonroutine samples when trace element demands changed.

And so the world of ICP-OES analysis was beginning to broaden, capable of analyzing a variety of sample matrices and elements of interest.  Be sure to read our next blog “The Evolution of Evolution of ICP Part III - The 1990s” as we continue to trace the development of ICP and the technological promises of today’s most useful technique for trace multi-element analysis.