With the 1970s known as the birth of ICP-OES and the 1980s as the era of versatility, the decade of the 1990s was the dawn of some major breakthroughs in ICP optical spectrometry.  These breakthroughs centered on the Plasma orientation and solid state Detectors, which initiated hopes of simultaneous detection of the entire ICP spectrum.

On early ICP-OES instruments, the plasma torch was mounted in the vertical (or radial) orientation and the plasma was viewed from the side. During the early 1990s, researchers began to investigate the possibility of turning the plasma on its side and viewing it “end on” (axial position).

By looking at the wavelength emission “through” the central channel of the plasma, emission intensity increased significantly resulting in a 5-10 fold improvement in detection limits for most elements.  The downside to the increased intensity was a tendency to certain interferences requiring knowledge of the sample matrix to get the desired result. This led to the development of dual-view systems where both radial viewing and axial viewing were incorporated into one instrument.  In this case, the historically difficult elements (e.g. As, Se, Tl, Sb and Pb), which were not prone to interferences, could be viewed axially, yielding higher sensitivity, while all other elements prone to interferences could be viewed radially.

At the same time that Plasma orientation was evolving, solid-state, charge transfer device (CTD) detectors (a.k.a. Array detectors, CCDs, CIDs) were replacing photomultiplier tubes (PMT). Prior to solid-state detectors, virtually all ICP – OES instruments used photomultiplier tubes (PMT) to convert photons of light into electrical energy.  Although PMTs are extremely affective light detectors, they have a few fundamental limitations that have inspired manufacturers and users of ICP-OES products to seek alternatives.  These limitations include the following:

Despite these limitations, anyone who has ever seen the unparalleled analysis speed of a PMT-based ICP simultaneous ICP, or compared the speed of PMT-based sequential to that of an array detector-based sequential, will find their appeal difficult to refute.

As stated earlier solid – state detectors held the promise of the ability to choose any set of simultaneous wavelengths at any time.  This promise took nearly another decade to be delivered. For manufacturers, these detectors presented both significant opportunities and significant challenges.  The opportunity was the allure of being able to produce a simultaneous ICP without all of the labor and material costs associated with PMT-based instruments.  The challenge was in figuring out how to compress the ICP spectrum down onto the size of the solid – state detectors that were available at the time (only about 6 mm by 6 mm) without destroying one of the most important aspects of any ICP – OES, optical resolution.  The small size of the early array detectors resulted in very significant limitations to both the resolution and the wavelength coverage of those array detector-based instruments. 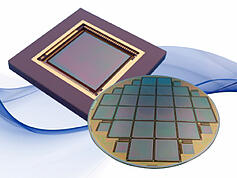 The largest detector available in today’s instruments is, at a minimum, 16 times the size of the early arrays allowing the user to capture the full ICP spectrum in a single integration.  Challenges aside, when the first commercially-available CTD-based instruments were introduced it began a market revolution that would result in a near complete transition from PMT-based simultaneous ICPs to array detector-based simultaneous ICPs.  Aside from the difference in initial cost, the dilemma about whether to purchase a simultaneous or a sequential ICP suddenly disappeared. In theory, every wavelength in the UV and visible portions of the spectrum could now be accessed….  all at the same time. Slowly but surely the vast majority of the ICP-OES marketplace changed.

In the final post of our Evolution of ICP series, we move into the 21st century, and modern ICP-OES, including advancements in measuring halogen elements by ICP, time resolved analysis for interfaces for LC and laser ablation for solid sampling.