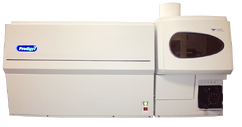 The instruments being marketed today have reached a level of sophistication that would not have seemed possible 40 years ago. Though the fundamental principles of the technique have not changed, the technology has seen significant advancements, especially in the design of the ICP source, optical spectrometer and detection systems. Simultaneously, milestones in real-time elemental coverage, sample throughput and ease-of-use, continue to make it easier to reach new pinnacles in productivity and data quality.

In the 1990s, labs faced the dilemma of purchasing a simultaneous or a sequential spectrometer. With the introduction of charge-transfer device detectors, that disappeared, as every wavelength in the UV and visible portions of the electromagnetic spectrum were now accessible at the same time. This changed the entire ICP-OES, and by the early 2000s, nearly all the ICP-OES manufacturers were using solid state detector technology.

In the last decade, further advancements have occurred, including the ability to measure the halogen elements by ICP allowing the analysis of chlorine and bromine at low concentrations. New instruments also included time resolved analysis for interferences for LC, using TRA as a detector for chromatography. Advancements in sample introduction include cooled spray chambers and switching valves to increase sample throughput.

Among the most recent advancements is the evolution of lasers as part of the vaporization process. While the use of laser beams as a solid sampling device for atomic spectroscopy were first investigated in the early 1960’s, it was another 25 years before the trace element user community explored coupling laser ablation with ICP-MS.  Previously solid samples were processed through an acid dissolution procedure.  Today, laser ablation is considered a truly routine sample introduction device for ICP-MS and has proved to be an invaluable tool for carrying out trace element studies on a wide variety of solid materials. In particular, the ability to analyze small spots or inclusions on the surface of rocks and minerals was a huge benefit for the geological community. More recently, laser ablation has been fine tuned and optimized as a bulk sampling tool for ICP-OES.

There are a number of different ICP-OES designs on the market today, and many share similar components (Nebulizer, spray chamber, plasma torch). Where they differ significantly is the design of the optical components and detection systems.

With more than 30 years of supplying ICP Spectrometers, Teledyne Leeman Labs understands that there is not a single ICP-OES instrument that is ideal for all applications. Leeman Labs’ family of ICP Spectrometers is available in radial, axial or dual view configurations with simultaneous array detector systems or high speed PMTs. The evolution of ICP-OES continues, which makes selecting the right instrument manufacturer even more important.