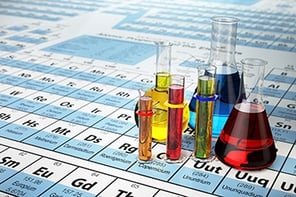 When it comes to analytical testing, there is a single organization that sets the requirements and develops the methods for determining the purity of reagent chemicals, the American Chemical Society (ACS).

Teledyne Leeman Labs recently completed an analysis of reagent chemicals to determine their ultratrace elemental levels. The purpose of the analysis was to “demonstrate the ability of the Teledyne Leeman Lab’s Prodigy7 simultaneous ICP-OES, to quickly and accurately determine ultratrace elemental levels in selected reagent grade chemicals.” The company performed the analysis using procedures developed by the ACS. Results were then compared with ACS specifications.

To introduce the samples, Yttrium (371.030 nm) was used as an internal standard and was added to standards and samples using the Glass Expansion Triton Mixing Kit (PN 115-00431).

Teledyne Leeman Labs analyzed five reagent chemicals, including HCl, KOH, Na2SO4, CaCO3 and NaCl. Some of the reagents were diluted with deionized water, acidified with five percent nitric acid, made up to volume and aspirated directly into the Prodigy7’s sample introduction system. Two samples of each reagent chemical were prepared; the first without modifications and the second spiked to calculate spike recoveries.

In its Application Note AN1606 that outlines the analysis, Teledyne Leeman Labs reported “the Prodigy7 can quickly and accurately measure the ultratrace elemental levels in selected reagent-grade chemicals.” The analysis found that “the concentrations of targeted elements did not exceed the specifications given by the American Chemical Society for heavy metals by ICP-OES.”

More About the ACS

The ACS was founded in 1876 by 35 chemists at the College of Pharmacy of the City of New York. Three years later, the organization published the first edition of its flagship publications, Journal of the American Chemical Society. By 1930, the ACS had more than 18,000 members; a number that now approaches 157,000 with 185 local sections throughout the United States, 33 specialty divisions and 24,000 international members. Today, ACS is the largest scientific society in the world.

According the ACS.org, the “Society publishes numerous scientific journals and databases, convenes major research conferences and provides educational, science policy and career programs in chemistry.” Every year, the ACS gives more than $22 million in grants for research in petroleum and related fields.

Its mission is to improve “people’s lives through the transforming power of chemistry.” The organization is an advocate for fostering innovation through research and technology; strengthening science education and the scientific workforce; advancing science through the open exchange of information and ideas; and promoting science and sustainability in public policy.