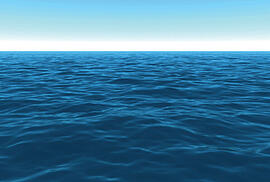 As expected, the research found that North Atlantic waters have the most “obvious signs of mercury from pollution,” while the Tropical and Northeast Pacific were “relatively unaffected.”

To determine the level of mercury in the ocean from human activity, researchers looked at databases of C02 in ocean water, which are extensive and readily available. Much of mercury and C02 come from the same activities, and researchers were able to relate the two and use it to determine the amount and distribution of mercury in the world’s ocean basins. This analysis produced the estimated 60K to 80K tons of pollution mercury, which is three times more than since the industrial revolution.

WHOI marine chemist Carl Lamborg said, "With the increases we've seen in the recent past, the next 50 years could very well add the same amount we've seen in the past 150. The trouble is, we don't know what it all means for fish and marine mammals. It likely means some fish also contain at least three times more mercury than 150 years ago, but it could be more. The key is now we have some solid numbers on which to base continued work."

Marine currents have moved a lot of the polluting mercury from the upper layers of the ocean to deeper layers, which are less populated by marine life. Lamborg warned that the ability of deep ocean water to isolate mercury might be coming to an end. Human activity is “starting to overwhelm the ability of deep water formation to hide some of that mercury from us, with the net result that more and more of our emissions will be found in progressively shallower water.”[ii]

If this happens, mercury levels in the ocean food species will increase, as will human exposure.

This study follows a 2007 study from WHOI that found more dissolved mercury was entering the ocean through groundwater than from atmospheric and river sources. Findings from the 2007 study were published in the journal Environmental Sciences and Technology. [iii]  A 2013 report issued by U.N. Environment Agency also indicated that mercury pollution in the top layer of the world’s oceans has doubled in the past century.

Teledyne Leeman Labs’ family of mercury analyzers is used by labs around the world to measure the concentration of mercury in solids, semi-solids and liquids. They were the first to offer turnkey operations for Hg analysis techniques: