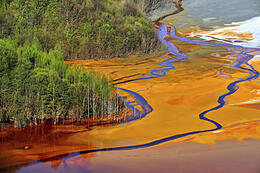 “The towers are another problem in town. Some of them are 200 feet tall, and their dust, which on breezy days blows across the prairie, still contains enough metal to make blood-lead levels among young children here three times higher than the national average.

“Then there’s the water. The local Tar Creek is the color of orange juice, and it smells like vinegar. This is because when the mining companies left, they shut off the pumps that kept abandoned shafts from filling with groundwater. Once water flooded the tunnels, it picked up all the trace minerals underground — iron, lead and zinc — and flushed them into rivers and streams. Fish and fowl fled or went belly-up.”[i]

According to the EPA, there are 112 sites like Treece in the United States, including Jefferson, N.C., which is home to an eroding dam holding back mining waste from abandoned copper mines; Spokane Indian Reservation in Washington State, where piles of toxic rock remain from uranium mining; and the Berkley Pit in Butte, Montana, which closed in 1982, but now contains a lake of rainwater mixed with arsenic, sulfuric acid and cadmium.  While the remnants make for fascinating photo logs and case studies, some are growing in size and their impacts may yet be fully evident.

Leeman Labs’ technology and instruments are used across the country and around the world to understand the level of contamination from these types of industrial sites and accidents so that the appropriate attention can be given towards prevention, cleanup and restoration. While contamination at these areas will be difficult to reverse, containing their pollution will be critical to prevent other areas, whether downstream, downhill or downwind, from suffering similar fates.

For more information on the Teledyne Leeman Labs Inductively Coupled Plasma Spectrometer (ICP-OES) Prodigy instruments that would be used to analyze for these contaminants, please contact us.