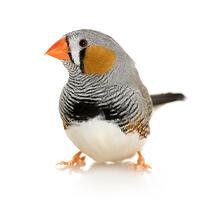 An episode of Winged Warnings, an online series about the impact of environmental problems on birds, wrote about this study in conjunction with National Geographic. Below is an excerpt from part 4 of the series titled, “Heavy Metal Songs: Contaminated Songbirds Sing the Wrong Tunes”:

Zebra finches, red-cheeked little songbirds from Australia, are used in labs as a model for vocal learning. Like humans learning to speak, they learn their songs as youngsters, starting out with babbling and gradually picking up their father's song. Cristol's team has used zebra finches to test a lot of the results they found in the field. Finches raised on mercury-laden food had the same nesting problems as songbirds in the field, for example.

Claire Ramos, then a postdoctoral researcher at the College of William and Mary, raised some of the finches on food containing mercury and others on uncontaminated food. Then she listened to their songs.

Ramos played a recording. “That's a normal zebra finch. As you can tell, it's kind of a twittery, complicated song,” Ramos said.

“And then here's a mercury-dosed finch,” she said, playing another recording. Its song was lower-pitched, less complex. Even to the untrained ear, the bird raised on mercury-laced food sang a much different song.

Sonograms show the uncontaminated birds reached high notes of around 8 kilohertz while the mercury-fed birds' highest notes topped out at around 6.

The fathers of those birds also ate the food tainted with mercury, since they were in the cage together. As a result, Ramos couldn't tell if the babies were bad at learning, or if they were actually learning perfectly but the song they were learning was already garbled by their mercury-poisoned fathers.

So she did a more detailed experiment. This time, as soon as the eggs hatched, she swapped some of the fathers. Now a mercury-contaminated baby could learn its song from an uncontaminated father. Babies from uncontaminated parents learned from contaminated males, too. Now an assistant professor at Colorado State University-Pueblo, Ramos is analyzing 300 hours of zebra finch songs to see what happened, but she suspects that mercury did its damage while they were still in the egg, scrambling how their brains grew.

“I think,” she said, “what we're going to find is that it's similar to what you see with speech learning in humans.”

In addition to altering the birds’ songs, mercury poisoning is also resulting in a variety of birth defects, from missing eyes to deformed bills, and it is also impacting some birds’ ability to fly. Mercury is one of the world’s most dangerous toxins, and as manufacturing and mining have increased, the levels of mercury in the environment have also increased, creating a number of major challenges for humans and wildlife.

To read Part 4 of the series in its entirety, visit EnvironmentalHealthNews.org.

Teledyne Leeman Labs Mercury Analyzers are used in many laboratories around the world to analyze water and food for Mercury. There are several published application notes for the analysis of Mercury. For a list of notes available for download click the box below: