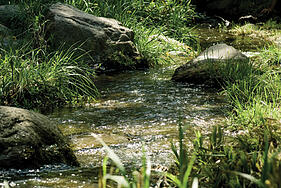 The report called mercury, “a potent neurotoxin that accumulates in fish to levels of concern for human health and the health of fish-eating wildlife. Mercury contamination is the primary reason for issuing fish consumption advisories,” which are currently in place in all 50 states of the nation. The USGS also indicates “Much of the mercury originates from combustion from coal and can travel long distances in the atmosphere before being deposited.”

The report identified three key factors that determine the level of mercury contamination in fish:

While mercury originates from a number of natural sources, “humans have more than doubled the amount of inorganic mercury in the global atmosphere since pre-industrial times, with substantially greater increases occurring at locations closer to major urban areas.”

The good news is that “many of the most acute sources of direct mercury discharges” have been controlled since the late 1960s. That leaves atmospheric emissions as the primary source of contamination of the U.S. lakes and streams. From 1990 to 2005, mercury emissions decreased by 60 percent in large part because mercury was removed from products and waste streams. Unfortunately, in order for mercury levels in fish to reach desired levels, mercury must be decreased by 93 percent.