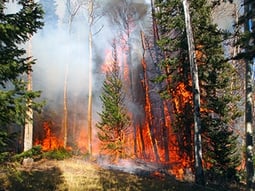 Spearheading a global group of scientists, the U.S. Geological Survey chronicled the mercury pollutants in the air, soil, sediment, plants, fish and wildlife throughout western North America.  Ecologists complied decades of data and studies to assess groupings of mercury and methylmercury.

Mercury, a heavy metal, is organically found in the rock of the earth’s crust.  It can become problematic when people, fish, and wildlife are subjected to elevated levels of mercury in its harmful configuration, methylmercury.

Methylmercury has to have precise conditions to accumulate. In water ecosystems, it is generated from inorganic mercury by means of bacteria. Methylmercury dexterously moves through the food chain, amassed by humans, fish and wildlife from their food sources.  When people, fish and wildlife are exposed to methylmercury in excessive levels, their nervous and reproductive systems can be severely impacted.

Fish are important indicators of methylmercury contamination since they connect animals and people via the food chain. In the USGS study, fish and birds throughout the West routinely had toxic methylmercury pollution. In fact, scientists “found mercury contamination of birds was common in many areas throughout western North America, some at levels above what is considered toxic to birds.”

Of special interest to land and resource managers, the study showed that land and water management methods can affect in what ways methylmercury is produced. The USGS report indicated that “Management of water flows and storage throughout the West can influence methylmercury creation in these aquatic habitats and can have a strong impact on the degree of mercury exposure throughout local food webs.”

Researchers also found that climate and land cover affect mercury contamination.  The dryer regions of the West, such as the Great Basin, had the most methylmercury levels in fish and birds, but the abundantly wooded areas of the West tended to contain the highest levels of inorganic mercury in the soil.

Because the topography, weather, and habitats are so varied in the North American West, the way that mercury is dispensed is varied.  Mercury infiltrates into the land from the atmosphere, from organic geological sources, mine excavations, and redistribution from foliage and soil.  Then mercury returns to the atmosphere by means of rainfall, snow or dust.  Vegetation can also release mercury into the atmosphere.

Mercury can also trek from the soil to the atmosphere.  In the West, this soil mercury movement is dependent on plant life configurations.  Since soil moisture and quantity of sun together influence mercury discharge, the amount of mercury that is released from the soil is varied.

The blazing intensity of burning vegetation from forest fires is a leading cause of re-releasing mercury into the atmosphere. The severity of the fire and the geographic size both reveal how much mercury is liberated.  Smaller fires can ditch mercury in the soil that can be emitted to the water ecosystems.

The study also found that considerable mercury has been released into lake and river sediments because of the West’s precious geologic resources, and because mercury was historically used to mine gold and silver.  Legacy mines have some of the most elevated concentrations of sediment mercury levels.

As communities across the North American West continue to build and develop land, more mercury is being released from the soil.  Farming and urban watersheds that flow into lakes show greater rates of mercury deposits than do lakes’ sediments in unruffled areas.

The complete findings of the USGS mercury contamination study can be found at USGS.gov.