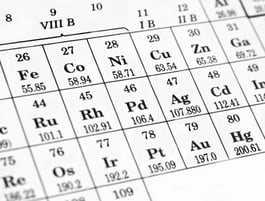 “Element 113 is the first to be discovered in an Asian country. The researchers proposed the name nihonium to celebrate it. ‘Nihon’ is one of two ways to say ‘Japan’ in Japanese, and means ‘Land of Rising Sun.’ The element was discovered by a team at RIKEN Nishina Center for Accelerator-Based Science and led by professor Kosuke Morita.” The team bombarded “a thin layer of bismuth with zinc ions traveling at about 10% the speed of light,” which formed an atom of element 113.

Moscovium and Tennessine honor their place of origin. For Moscovium, “Researchers used the Dubna Gas-Filled Recoil Separator at the Joint Institute for Nuclear Research along with the heavy ion accelerator capabilities at the Flerov Laboratory of Nuclear Reactions in Moscow. For tennessine, researchers at the Oak Ridge National Laboratory, Vanderbilt University and the University of Tennessee at Knoxville worked together on superheavy element research and synthesis using Oak Ridge's High Flux Isotope Reactor and Radiochemical Engineering Development Center.”

Organesson was named for professor Yuri Organessian, a pioneer scientist whose achievements include the discovery of superheavy elements.

Regarding the naming process, IUPAC President Prof. Natalia Tarasova said, “The names of the new elements reflect the realities of our present time, universality of science, honoring places from three continents, where the elements have been discovered -- Japan, Russia, the United States -- and the pivotal role of human capital in the development of science, honoring an outstanding scientist -- Professor Yuri Oganessian.

Unfortunately for chemistry students, researchers are already working on elements that will complete the eighth row.

It didn’t take long for someone to put the new periodic table to song:

For more information on Elemental analysis and instruments used in various analysis, please visit www.teledyneleemanlabs.com or contact us