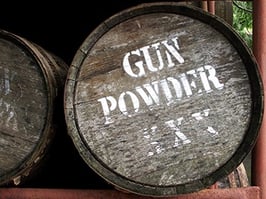 The run-down buildings on the current site were constructed in 1916 for munitions manufacturing. In 1934, the Remington Arms Company acquired Peter’s Cartridge Company with production continuing until 1944 when the DuPont Company purchased the site. “Peters Cartridge Co., along with its parent company the King Powder Co., got its start more than a century ago by casing bullets and manufacturing cannonballs for the Union Army in the Civil War.”

The Kings Mill plot consists of two areas. “Area A, occupies approximately 15 acres located in the floodplain and along the south valley wall of the Little Miami River. Area B is a 56-acre parcel of unimproved wooded land on the southern, west/southwestern and east/southeastern borders of the fifteen 15-acre parcel.”

DuPont is liable for the cleanup.

The EPA describes the threats and contaminants as follows:

“An environmental assessment of Area A was conducted in 1987 during which on-site soils were sampled at depths of one, four, eight and twelve feet. Lead, copper and mercury-contaminated soils were found near each building in Area A, consistent with the manufacture of munitions.

Since 2004, the DuPont Company and the EPA have been negotiating the site cleanup. In 2012, the EPA added the site to the Superfund list, ordering the DuPont Company to clean up the property.  A February 2015 Cincinnati Enquirer article described the cleanup plan:

“Officials plan to remove 42,000 cubic yards of soil and sediment contaminated with lead, mercury, copper, antimony, arsenic and other harmful materials from several areas at the site at 1415 Grandin Road.

“Crews will begin this spring by clearing hundreds of trees on the Peters property and about 56 acres of adjacent land owned by Hamilton Township. The township purchased the land with a Clean Ohio grant so that the land could only be used as green space and the contamination would not be disturbed.

“The contaminated soil will be treated and then placed in a 4-acre landfill in the southwest portion of the property owned by Hamilton Township. The soil will be enclosed within an impermeable synthetic liner and capped by clean dirt and cover, officials said.

“Vegetation will top 3 acres of the landfill site. The remaining acre will be covered with asphalt to create a trailhead parking lot for horse trailers, said Hamilton Township administrator Gary Boeres.

“Less than 1 percent of rainwater is expected to penetrate the ground cover, but none will come into contact with the treated soil, Yalvigi said.

“Officials plan to finish the cleanup work by late fall and re-vegetate the area with seedlings and saplings in 2016 and 2017.”

The FDA will conduct lifetime inspections of the landfill site to ensure that the landfill lining remains intact.

The apartment project developers updated the media in May 2016 about the remediation project, indicating that mercury, lead and copper tainted soil had been removed and that construction could begin in the summer or fall of 2016 with completion at the end of 2017.

Warren County Ohio officials however, said they had seen the remediation plan on the EPA website, but were not aware of its progress or when it is to be completed.