For most applications, the ICP-OES requires the sample be in liquid form. Solid samples can be acid digested or dissolved in a solvent suitable for use with the ICP.

Liquid samples are delivered to the ICP using a sample introduction system, which is made up by the torch, spray chamber, nebulizer, peristaltic pump and tubing. In this blog post, we will look at the nebulizer.

The nebulizer’s function is to convert the liquid sample to an aerosol that is delivered to the ICP torch. The aerosol passes through the spray chamber up to the plasma, where the atoms in the sample emit their characteristic wavelengths of light the instrument measures to determine their concentrations.

Let’s take a look at the nebulizers most commonly used on Teledyne Leeman ICPs.

The concentric nebulizer is the most commonly used nebulizer for ICP-OES.

This type of nebulizer consists of two tubes: a thin capillary tube for the sample around which is another tube for the delivery of gas (Figure 1). As the gas passes over the end of the sample capillary, a low pressure region is created which draws sample up through the capillary. The combination of the low pressure and high gas velocity breaks the solution up into droplets, which then enters the spray chamber (Figure 2). Though this nebulizer is self-aspirating, it is typically used with a peristaltic pump to compensate for differences in viscosity and surface tension. Its efficiency is approximately 2%.

The overall performance of this nebulizer is good, exhibiting excellent long term stability, precision and detection limits. Its main disadvantage is being prone to clogging by particulate matter and solutions containing high levels of dissolved solids. (There are specific models designed for high solids operation.) The sample capillary can be extremely fragile on some models, making the nebulizer difficult to unclog. Also, because of the glass or quartz used in their construction, they cannot be used with solutions containing hydrofluoric acid (HF).

The Leeman V-groove is made out of Ryton™ (Figure 3). Sample is pumped through the top orifice and flows down the groove. In the groove, there is a smaller orifice that the argon gas flows through. When sample flows over the gas orifice, it’s nebulized into the spray chamber. 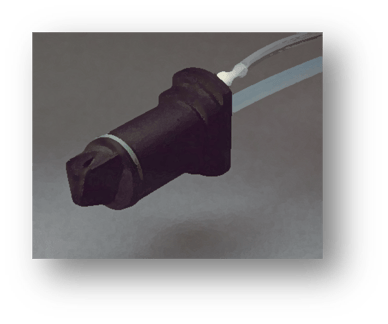 The Hildebrand Grid (HGN) is the high solids nebulizer used on Teledyne Leeman Labs ICPs. In this nebulizer, the sample is pumped through a tube which deposits a uniform liquid film behind a Pt grid. A gas stream passing through a tiny orifice in a sapphire crystal drives the solution past the grid generating an aerosol. Approximately 2 mm from the first grid, lies a second grid which acts as a multiple impactor, serving to further break up the aerosol into finer droplets. This results in a higher overall efficiency than exhibited by any of the nebulizers mentioned above. The “well” that exists between the two grids also serves to filter pulsation arising from the peristaltic pump. 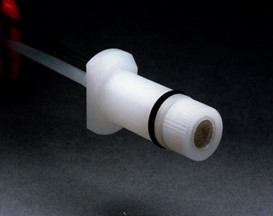 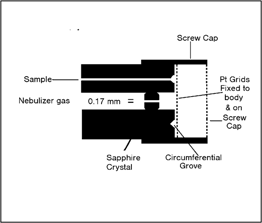 The HGN is capable of excellent precision and long term stability, equivalent to concentric nebulizers and superior to the cross-flow. The grid also has much greater tolerance to high levels of dissolved solids, being capable of aspirating 30% NaCl without the need for an argon humidifier. The grid also provides much better precision than the v-groove when aspirating high salt solutions. Like the v-groove, the grid nebulizer can run solutions containing HF and also excels at running organic solutions.

Studies have shown the HGN to be an excellent overall nebulizer. It possesses the strengths of both the concentric and v-groove. This means any sample can be run without having to switch nebulizers. “Normal”, high salt, HF containing, and organic samples can all be run using only the grid.