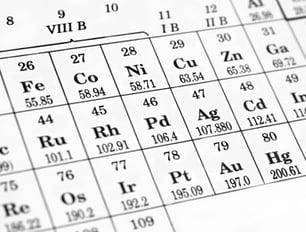 In a press release from December 30, 2015, IUPAC said that it has “reviewed the relevant literature for elements 113, 115, 117, and 118 and has determined that the claims for discovery of these elements have been fulfilled, in accordance with the criteria for the discovery of elements of the IUPAP/IUPAC Transfermium Working Group (TWG) 1991 discovery criteria. These elements complete the 7th row of the periodic table of the elements, and the discoverers from Japan, Russia and the USA will now be invited to suggest permanent names and symbols.”

Elements can be named for the scientist that discovered them or after a mineral, place, country and mythological concept. The four elements that completed the 7th row are all man-made elements, “discovered by slamming lighter-nuclei into each other and tracking the following decay of the radioactive superheavy elements. The superheavey elements only exist for a fraction of a second before they decay into other elements.

RIKEN President Ryoji Noyori suggested that credit for an element “is of greater value than an Olympic gold medal.”

Mark Cesa, president of IUPAC from 2014-15, said in The Chicago Tribune, "Filling in the seventh row of the periodic table is a great big deal to us chemists because it expands what we know about nature; these new elements really do exist. It tells us that even more new elements may be possible."

While Cesa, scientist and teachers are excited for the discovery and the completion of the table, science students everywhere may have just let out a collective sigh knowing that they have four more elements to memorize.