In contrast to most cold vapor atomic absorption (CVAA) systems, the desirable characteristics of CVAFS-based mercury analyzers include:


The detection limits for fluorescence without pre-concentration on a gold coated substrate is typically less than 0.2 ng/L, whereas employing gold amalgamation can be as low as 0.01 ng/L. The US EPA has promulgated methods for each of these approaches. Method 245.7 is for use without gold amalgamation and Method 1631 is with gold amalgamation. These methods were developed to satisfy the need for quantitation at the National Recommended Water Quality Criteria for mercury. These criteria are published pursuant to Section 304(a) of the Clean Water Act (CWA) and provide guidance for states to use in adopting water quality standards which ensure that ambient waters are safe for fish, and subsequently, that fish are safe for consumption. Additional information on this subject is available at

CVAFS instruments typically utilize a peristaltic pump to introduce sample and a stannous chloride reducing agent along with a stream of pure, dry argon gas to a Gas Liquid Separator (GLS) where it releases mercury vapor.


The process to this point is like that of CVAAS, although chemical preparation prior to analysis may be quite different. The mercury vapor is then transported by the carrier gas through a dryer to an inert switching valve where it is either directed to a gold trap for pre-concentration prior to introduction to the fluorescence detector or directly to the detector by-passing the gold trap altogether. The drying stage is quite important in atomic fluorescence as water vapor and other molecular species can interfere with the measurement. Once in the detector, mercury vapor absorbs light at 253.652 nm creating fluorescent light at the same wavelength. Fluorescence detection is made at 90 degrees to the incident beam to minimize any incidental light scatter from the excitation source itself. The intensity of the fluorescent light is directly proportional to the concentration of mercury in the sample. 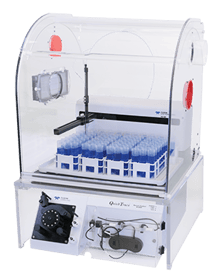 
An acidified digested aqueous sample from the autosampler is introduced, via peristaltic pump, as Hg2+ dissolved in solution (1). An optional Hydroxylamine Hydrochloride (NH2OH HCl) addition to the sample stream occurs at the first mixing tee (2). Simultaneously, a reducing agent (10% SnCl2 in 7% HCl) is introduced via a parallel pump channel and is mixed with the sample stream at the second mixing tee (3). The liquid mix then enters the liquid mix tube (4). Stannous Chloride (Sn2+) reduces Hg2+ in solution to Hg0 while the mixture is en route to the Gas Liquid Separator (GLS) (5). At this stage (prior to the GLS) the analyte is present as a finely dispersed emulsion of liquid (metallic) Hg0 micro-droplets, in excess SnCl2 solution medium. The finely dispersed Hg0/SnCl2 emulsion is introduced into the top of the GLS. The Hg0/SnCl2 emulsion flows over the frosted GLS center post in a thin film, covering the entire post from top to bottom. A carrier gas simultaneously enters the bottom of the GLS tangentially. The carrier gas swirls around the wetted center post and upwards toward the GLS gas exhaust port.


Hg0 droplets in the thin emulsion film quickly evaporate into the gas vortex surrounding the post. The carrier gas stream efficiently sweeps this Hg0 vapor (along with some evaporated water) upward and out of the GLS gas exhaust to the Nafion® dryer (6). The dried gas can then be directed to either one or two optional gold traps (7) that capture the mercury while letting the other gases pass through. The gold trap(s) is/are then heated to release the Hg0. Finally, the dry Hg0/carrier gas mixture exits the dryer and enters the sample cell in the spectrometer (8) for a fluorescence measurement by the AF Detector (9). Ultimately, the gas stream exits the sample cell and is exhausted to a solid KMnO4 trap where Hg0 is absorbed and clean carrier gas passes to the lab atmosphere. Most of the water bulk containing excess reducing agent, acid, any non-participating spectator ions, and reaction by-products drains out the bottom of the GLS and is pumped to waste.

Is CVAA or CVAF the Right Technique for Your Lab?
Selecting the right mercury analysis technique ultimately depends on your specific analytical needs. Many laboratories need to comply with a specific regulatory method, especially in the environmental field. For example, if your lab is required to analyze drinking water samples using EPA method 1631, then you will need to use CVAF. If your lab is not beholden to a specific method, there are other factors to consider such as sample matrix and detection limit requirements.

The Teledyne Leeman Labs QuickTrace M-8000 CVAF Mercury Analysis System will meet your needs and will be a sound, long-lasting investment. Contact us for more information or visit our website- http://www.teledyneleemanlabs.com/products/mercury-analyzers