Since its commercial inception in 1974, ICP-OES has seen significant technological advancements over its 39-year lifespan.  In this four-part blog series, we will summarize the evolution of ICP-OES technology and show how it has come to be applied to an ever-growing amount of sample types and elements of interest, as it has matured.  Each blog post will cover the significant milestones that have occurred in ICP-OES through the past four decades.  Because the ICP-OES specialization is very much a language of its own, useful terminology will appear in bold and will be defined in an upcoming downloadable glossary of ICP-OES Terms and Definitions.

Inductively Coupled Plasma - Optical Emission Spectrometry (ICP-OES) is a multielement technique used to measure the concentration of various elements in a variety of sample matrices.  Also known as Inductively Coupled Plasma - Atomic Emission Spectrometry (ICP-AES), the technique is capable of measuring a majority of elements in the Periodic Table and is currently one of the most widely used methods for elemental analysis today.

ICP-OES uses extremely high temperature argon plasma to excite atoms to the point where they emit their characteristic wavelengths of light (emission lines).  The intensity of the emitted light (emission intensity) is directly proportional to the concentration of the elements in the sample.  By measuring the emitted light by known and varying concentrations of an element (by performing a “calibration”), the concentration of an unknown sample can be determined by comparison.

There is little question that ICP-OES has emerged as the dominant technique for trace multielement analysis.  From 1983 to 2013, approximately 48,000 ICP-OES systems have been installed.1  These instruments are used to perform analysis of a broad range of sample types in numerous industries including: agricultural, environmental, geochemical, metallurgical, petrochemical and wear metal, as well as many others.

The first commercial ICP-OES instruments were introduced in 1974.  These ICP forerunners were based on the Paschen-Rünge optical design, which included permanently mounted diffraction grating, and fixed entrance and exit slits (generally referred to as fixed optics).  These instruments produced a simple linear spectrum that fell along the focal curve of the instrument.  A schematic of this design and its associated spectrum is shown below: 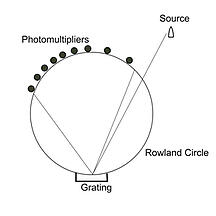 These early ICP instruments were modified versions of arc/spark emission spectrometers (used in the metallurgical industry) in which the arc emission was substituted with inductively coupled plasma. Despite their exceptional speed (with typical integration times of only one to three seconds), they tended to lack the spectral resolution provided by modern ICP instruments and were subsequently prone to interelement interferences from the emission line rich ICP source.

Because these instruments were designed around a fixed entrance/exit slit architecture and used PhotoMultiplier Tubes (PMT) for light detection, they lacked the wavelength versatility required to measure elements other than those incorporated into the instrument when it was built. Because ICP’s origins are based in the metallurgical industry, this limitation was not initially an issue as Metal analysis laboratories tend to focus exclusively on a small number of sample matrices and elements of interest (e.g. aluminum alloys, iron alloys, etc.).  But as the use of ICP-OES has expanded, many laboratories have had an increasing desire to analyze diverse sample types and more elements of interest.

In part two, we will jump into the 1980s with new optical design innovations and improvements in wavelength versatility.