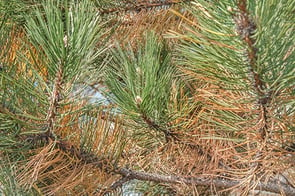 The study analyzed leaves and soils for total Hg concentration by means of atomic absorption spectrometry; while leachable fraction of soil Hg was also analyzed by the CV-AFS technique.

According to the results of the study, “soils from the investigated area were not directly affected by mining related pollution, with low total Hg levels (3-280 mg kg-1) found in comparison with the nearby Almadén metallurgical precinct and very low leachable Hg contents (0.27-59.65 mg kg-1) were found. Moreover, pine tree needles have a low uptake capacity, with lower THg levels (0.03-6.68 mg kg-1) when compared to those of olive trees in Almadén. However, pine needles do show significant variability with regard to the distance from the source. Gaseous Hg exhibits a similar pattern, with higher levels close to the source, especially during night time (225 ng m-3). A multiple linear regression analysis (MLRA) revealed that gaseous Hg in the nocturnal period is the prime factor that influences the amount of Hg uptake by pine tree needles.”

The findings of the study suggest that pine needles are a “promising candidate to biomonitor gaseous Hg on a local or regional scale worldwide.” This is a result of the pine needles being exposed to a variety of Hg sources, from the old mine dump to polluted roads and urban residue waste.  Despite these findings, the secondary sources of mercury cause some minor discrepancies in the model established by the MRLA, and additional biomonitoring capacity of pine needles needs to be evaluated in areas far from the source.

Teledyne Leeman Labs recently published a technical note on the analysis of pine needles from NIST, using the Hydra IIc  Mercury Analyzer using the moisture control system described in Application Note – AN1701 to enhance the performance of the analyzer in standard direct combustion mode.

The Hydra IIc  eliminates the need for sample pretreatment and waste generation associated with wet chemistry. The weigh samples were introduced into the analyzer using an automated sequence and unattended analysis was completed for each sample in approximately 6.5 minutes. Direct analysis of mercury content by Thermal Decomposition is described in methods USEPA 7623, 7473 and ASTM 6722.

Download the technical note from Teledyne Leeman Labsto learn more about method parameters, calibration, procedures and results. With the addition of the moisture control system, the Hydra IIC in standard mode is an ideal system for the determination of concentration of mercury in Pine Needles.