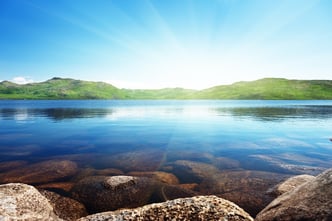 Clear Lake near Clearlake Oaks, California is home to the Elem Indian Colony, but while it has been an area of spiritual significance to the colony, it has better known as a toxic dump for mercury contamination as a result of the Sulfur Bank abandoned mine. For more than a century, the mine has leached tons of mercury in to the lake, poisoning the tribe’s food chain and the fish in the lake. The U.S. Environmental Protection Agency has been studying the mine since 1990, and engaged in a number of cleanup operations and preventive efforts to reduce the contaminated runoff.  The EPA considers the mine a high priority and will complete a feasibility study in the spring of 2017.

An excerpt from The Press Democrat describes the problem with abandoned mines in California, which totals more than 47,000, 11 percent of which present environmental hazards.

“The state has identified roughly 150 ‘mercury impaired’ reservoirs including Lake Sonoma, Lake Mendocino, Lake Berryessa and Lake Pillsbury. Even Spring Lake in Santa Rosa is on the list for future study, due to concerns about mercury levels in fish.

“Contaminated runoff from abandoned mines impacts tens of thousands of acres of public and private land, along with groundwater and hundreds of streams, rivers and lakes, according to the California Department of Conservation.

“Abandoned mines release a host of toxins, including arsenic, asbestos, lead and other chemicals. But mercury is the most insidious, accumulating in fish that become hazardous to eat.”

Clear Lake is a 60-square mile body of water that finds its way to the San Francisco Bay. While the lake has had a number of problems from blue-green algae blooms to invasive plant species, the mercury is creating the biggest concern as it flows beyond Clear Lake and “into the aquatic food chain.”

Considered a Superfund site by the government, Sulfur Bank mine has already cost more than $60 million with a total to exceed $100 million.  The mine was once one of the largest producers of mercury and has been inactive since 1957. Despite the dormancy of the mine, “approximately 150 acres of mine tailings and waste rock remain from what was piled into the lake and close to shore. Mercury, with suspected carcinogens arsenic and antimony, seeps into the lake aided by groundwater springs.”

The lake serves a number of communities with drinking water, but used that way, the mercury concentrations are not a concern. What worries the EPA and local residents is the consumption of fish by people and local wildlife, which includes three endangered species, the peregrine falcon, southern bald eagle and yellow-billed cuckoo. A 2007 survey of over 200 of the most popular fishing lakes in California found that 50 had one specie with methylmercury levels exceeding what are recommended for consumption by women or children. In 2015, a small sample size of 20 fish was taken from Clear Lake for analysis. Fourteen had blood levels that exceeded the maximum pollution limit.

There is also evidence that mercury is having an impact on the people in the area. Blood tests of 44 members of the tribe taken during the 1990s showed levels of mercury as much as twice of the general public.

Since 1990, the EPA has approved a variety of work to stop the spread of mercury, including “erosion control to stabilize the shoreline waste, diversion of storm water away from the mine pit, covering contaminated sediment with clean soil and vegetation, and dumping sand and gravel on top of the lake bed.” There is an estimated 2-3 million cubic yards of waste that need to be removed, which is “equivalent of at least 200,000 dump trucks.”

Of the 200 people in the tribe that once lived in this area, only eight homes remain.