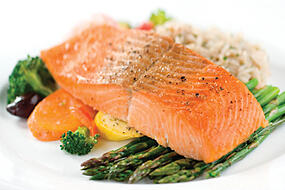 People are frequently exposed to mercury in one of four ways:

Elemental mercury can travel over great distances and remain in the atmosphere for an extended period of time. Much of what happens to the mercury deposited into the environment depends where (terrain) and when (weather and other environmental conditions) it is released. According to the EPA, “Recent emissions estimates of annual global mercury emissions from all sources, natural and anthropogenic (human-generated), which are highly uncertain, are about 5,000-8,000 metric tons per year.”[i]

The most common exposure for humans to mercury is through eating contaminated fish and shellfish. While almost everyone has a trace of methylmercury in their systems, the impact on someone’s health really depends on the amount, the form, duration and route of exposure, and the age and health of the individual.

Methylmercury is most harmful to fetuses, infants and children, targeting and killing neurons in the visual cortex, cerebellum and dorsal root ganglia.[ii]

The National Institute of Health issued the following regarding prenatal exposure:

“Depending on the dose and timing of exposure during gestation, the effects may be severe and immediately obvious, or subtle and delayed... Neurological symptoms include mental retardation, ataxia and cerebral palsy, seizures, vision and hearing loss, delayed developmental milestones, language disorders, and problems with motor function, visual spatial abilities, and memory. The newest findings from long-term cohort studies suggest that the cardiovascular system is also at risk—with increased incidence of high blood pressure and decreased heart rate variability as methylmercury exposure increases. The full expression of these health effects of methylmercury can be delayed and deficits are often irreversible.”[iii]

A recent study found that children who exposed to heavy metals are at risk of attention and behavior problems later in life.

“Children with the highest concentrations of mercury in their cord blood had more trouble paying attention than those with lower levels. They were also about three times more likely to be flagged by their teachers as having these symptoms of ADHD.”[iv]

The EPA cited the following symptoms of methylmercury poisoning: “impairment of the peripheral vision; disturbances in sensations (‘pins and needles’ feelings, usually in the hands, feet, and around the mouth); lack of coordination of movements; impairment of speech, hearing, walking; and muscle weakness.”[v]

Breathing in elemental or metallic mercury can cause a variety of health effects, including tremors, emotional changes, insomnia, neuromuscular changes, headaches, and cognitive performance deficits.

Exposure to inorganic and organic mercury can damage the nervous system, gastrointestinal tract and the kidneys.

For more information on the effects of mercury exposure on people, visit http://www.epa.gov/hg/effects.htm.

In the final part of our mercury blog series, we will focus on the sources of mercury, and the regulations that are trying to control how it is used and released into the environment.