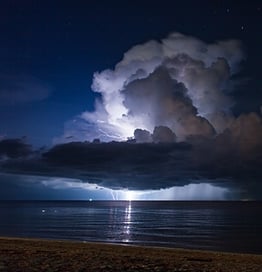 The familiar Florida summertime clap of daily thunder signals to the kids playing ball outside that it is time to go inside for a bit.  Any U.S. Gulf Coast kid knows when the thunderstorm clouds roll overhead to get to shelter—fast--- because next to come are the threatening lightning strikes. While the lightning is a dangerous concern, the invisible pollution dangers from thunderstorms may be even worse than the lightning strikes.

The Mercury Deposition Network has evaluated rainwater nationwide for twenty years.  It has puzzled analysts as to why the mercury levels were persistently so much higher in the southeast, especially in the Gulf Coast states of Florida and Louisiana, than those of northern states.

A new study in Environmental Science and Technology revealed that thunderstorm rain has a 50 percent greater concentration of mercury than that of routine rainstorms. The higher proportion of mercury in thunderstorms means higher mercury pollution in the rain of the Gulf-bordering states.  This is the first study to illustrate a causal connection coupling thunderstorms and mercury deposition.

Researchers compiled rain samples from an assortment of locations across Florida and the Eastern U.S. Scientists matched up over 800 samples with weather data to distinguish if rain was from a standard rainstorm, or if the rain was from a thunderstorm.

Characteristically, everyday rain clouds are two or three miles thick.   Thunderstorm clouds reach altitudes of at least nine miles, and researchers surmise that is where the mercury comes in to play.  More mercury pollution in the higher levels of the atmosphere, means more mercury absorbed into the thunderclouds.  When thunderstorms deliver rain, it transports the mercury to soil and water.  Since a great percentage of the rain in Florida and Louisiana in the summer and fall comes from thunderstorms, these states have more mercury pollution.

Researchers now know how the mercury is being disseminated in the rain from thunderstorms.  But they still can’t yet identify why there are elevated amounts of mercury at higher altitudes.

Even though mercury is a naturally occurring element, and is used in everyday items such as thermometers, exposure to mercury has proven harmful to people, fish and wildlife.  Mercury that is deposited from rainstorms in soil and water can end up moving through the food chain into fish, which is then consumed by humans.

“All 50 states have at least one mercury advisory for eating fish from a local body of water, and all the Gulf States have statewide advisories in effect, warning of high mercury in fish from their coastal marine waters.”

Mechanical or chemical operations, mining and electronics manufacturing all produce mercury. Even though mercury emissions in the United States have reduced considerably in the past few decades, there is a 100-year legacy of mercury in the atmosphere, waterways and soil. The problem is further amplified by industries around the world still producing large amounts of mercury.

In fact, roughly 70 percent of mercury deposited into the U.S. ecosystem is produced outside the United States. Researchers are optimistic that their new findings will drive new conversations about the effects of mercury pollution.